Beer is a feminist issue

As well as writing about feminist issues I am also a beer enthusiast and have a beer website called A FemAle View:  This post is an example of how my two specialist subjects sometimes cross over.

Granted it’s not the biggest issue facing womankind, but an area where we still face prejudice and some discrimination is beer and brewing. As with many women’s issues there have been ups and downs. There’s a fair amount of evidence that women were the first to brew beer, but as recently as the 20th century (and do shout if you know any examples of it this still happening) if women went to the pub at all they were restricted to the lounge bar or even considered prostitutes. Bizarrely, women going to pubs – and shock horror drinking beer in pint measures – has also been used as a way of gauging our sexuality – it apparently means you are a lesbian. Yes, this is anecdotal, but it’s a conclusion that’s been made about and pointed out to me on more than one occasion, albeit many years ago now.

Peculiar attitudes to women who work in the beer and brewing industry still persist though. From the relatively minor such as comments from men, including male bar staff along the lines of “What’s a nice girl like you doing drinking something like that,” to, a brewery employee who laughed openly when I mentioned I was planning a piece about women brewers, commenting that he didn’t think there were that many because the job requires a lot of physical strength; (At least one female brewer ­ – or brewster – I know pleaded with me to tell her who said this so she could punch him on the nose backed with the same muscles used to dig out the tonnes of spent grain from the mash tun, a job she usually does solo) on to some of the horribly sexist imagery used to sell beer, be it on pump clip or advertising, from the recently headline-hitting Slaters brew Top Totty, to more obscure but no less problematic beers with names like Hanky Panky, both using pump clips featuring images of a semi-naked females which not only objectify and degrade women, but also indicate the brewers think that only men (or lesbians?) drink beer.

What I’ve highlighted above is a problem not just because it is sexism but because it might put women off trying and/or enjoying the fantastic drink that beer is!

Luckily there are many women (too many to mention in one post in fact) aiming to redress the balance and make sure other women don’t miss out and this week there is even a women-only beer event where we can enjoy a few glasses of this magnificent beverage free of any of the anti-women sentiment that sometimes goes with the territory. It’s being held in Birmingham and hosted by a pal of mine, Marverine Cole who goes under the moniker of Beer Beauty. I must confess that it won’t be a 100% womanspace as she does have two male co-hosts, but only female punters are allowed in for the six-beers-paired-with-six-tapas-dishes-bash.

Bash might not be the best description actually, as the evening is designed to be a glamorous event for discerning women who either already love beer, or would like to find out just how far it has moved on from its blokey, beer-bellied, flat cap and whippet image; how great it tastes and how many different kinds of beer there are.

For example, there are dark beers with coffee and chocolate flavours, honey-sweet golden beers, crisp and refreshing lagers (nothing like your average pint of Fosters/ Stella/Heineken) and strong, fruity beers that sometimes get their flavour from actual fruit but often from a skilful blending of malt (made from barley) and hops. There are hundreds of styles of beer and even more individual beers within those styles. It is, quite simply, one of the most varied and exciting drinks there is and something that women shouldn’t be missing out on!

So, if you are in Birmingham (in the UK’s West Midlands) this Thursday, 29th March (2012), come along to FemALE at the Malmaison Hotel and strike a blow for women enjoying yet another thing that for too long and too often has been designated only for blokes. 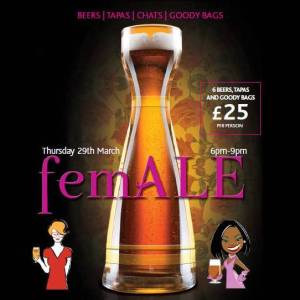