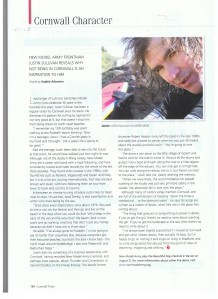 This piece I did for the July 2010 issue of Cornwall Today magazine wasn’t published online, so the text follows below. If you fancy taking out a subscription to this wonderful magazine, click on http://www.cornwalltoday.co.uk/ .

Lead singer of cult rock band New Model Army (who celebrate 30 years in the business this year), Justin Sullivan has been a regular visitor to Cornwall since his teens. He dismisses his passion for surfing by saying he’s not very good at it, but that doesn’t stop him from being drawn to north coast beaches.

“I remember my 13th birthday was spent walking across Polzeath beach thinking: ‘Now I’m a teenager, wow!’ I had a Cornish pasty in my hand and I thought: ‘Life is great, life is going to be great.”

Had the teenage Justin been able to see into the future at that point, he would have realised just how right he was. Although not of the stadium-filling variety, New Model Army are a career rock band with a loyal following, and have consistently toured and made records for the whole of the last three decades. They found chart success in the 1980s, with Top 40 hits such as No Rest, Vagabonds and Green and Grey, but it is as a live act, touring internationally, that they are best known and loved, with fans following them on tour from town to town and country to country.

In-between an intense touring schedule Justin likes to head west to relax. His partner, Joolz Denby, is also a performer and writer who loves being by the sea.

“She’s done every Glastonbury since about 1979. We used to hire a van, do the festival and then go and live on the beach in the days when you could do that. We’d sleep in the back of the van and lie around on the beach, look in rock pools and go walking, anything that didn’t cost any money because we didn’t have any in those days.”

He adds: “I’ve always gone to Polzeath. I’m not going to say it’s better than anywhere else, because everyone’s got their favourite beaches, but that’s the area I know best – the north coast around Wadebridge. I also love Trebarwith and Bedruthan Steps.”

Justin also has something of a business relationship with Cornwall, having recorded New Model Army’s seminal, and perhaps most popular, album Thunder and Consolation at Sawmill Studios on the Fowey Estuary. The band’s former drummer Robert Heaton (who left the band in the late 1990s and sadly lost a battle to cancer when he was just 43) heard about the studios and told Justin: “You’re going to love this place.”

“We drove a van down to the little village of Golant and had to wait for the tide to come in. We put all the drums and guitars into a boat and went along the river to a little lagoon off the edge of the estuary. You can only get in at high tide. You can walk along the railway line to it, but there’s no road to the place,” Justin tells me, clearly relishing the memory.

“When we were there, the accommodation for people working at the studio was just very primitive cabins in the woods. We absolutely fell in love with the place.”

Although many of Justin’s songs mention Cornwall, and are full of the exhilaration of heading “down the three-o westbound … to the diamond water”, he says his songs are written as a matter of desire, when he’s not in the place he’s writing about.

“I’ve always been slightly scared that if I moved to Cornwall and got what I dream about, then actually I’d stop. So I’m happy to go on visiting it and to go on living in Bradford, and to write songs about the sea just from the point of view of dreaming, imagining and wishing.”