The power of books and birds

A new book explains how bird watching saved a man – and how it can heal others.

There has never been a better time for a book about the healing power of birds. Even those blessed with consistently good mental health are feeling the strain of the political climate and its associated societal divisions. More than a third of us are actively avoiding the news (according to a poll by YouGov for the University of Oxford Reuters Institute). The internet and social media hold people tight in their grip, like rubberneckers looking for bodies as they pass a car crash, thereby magnifying the misery. 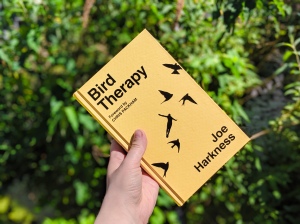 This is why Joe Harkness’s debut book, Bird Therapy, about the power of birds and being outdoors for healing the wounds caused by mental distress is so very timely. It is at once an enormously personal book, but also relevant to just about anyone who takes or has taken any pleasure in being outdoors or even in just looking at the natural landscape.

It’s part memoir and partly – I hesitate to say ‘self help’ book, because that would bracket it with a lot of sensationalist guff (although not all self help is like that) – an aim to inspire people to try an easy but effective method of self care that has often instant results. In common with other therapies though, one does need to repeat it regularly to keep topping up these effects.

Harkness suffered a breakdown that nearly resulted in suicide. This is how his book opens, but from there on in it becomes a story of redemption; of being saved from the bleak horror that mental illness can be. The healing begins with going for a walk in the countryside and seeing a buzzard – a magnificent bird of prey that flies on fingered wings and looks to many just like an eagle. It’s an epiphany for him, stirring childhood memories of being outdoors and lifting his mood with its flight.

Not only did this buzzard have mood-altering properties, it also provided a lightbulb moment about how watching birds can be therapeutic. Fitting it round something called ‘the five ways to wellbeing’ – which in themselves sound like something everyone should be

making use of – he takes up birdwatching. It gives him a way of understanding his mental health issues and of soothing them.

For anyone who already watches birds or who thinks of themselves as a birdwatcher, or even a birder (like a birdwatcher but with more anorak involved), Harkness’s tales of adopting the hobby will be familiar. At times they’re amusing, at others disheartening (like the miserable old gits who are rude to him in a hide one day, which had me thinking a stronger version of “Sod off, bastards!”).

In common with many starting to learn about birds, he begins with his garden. He wisely realises how avian visitors can be a mental wellbeing touchstone – which he dubs his bird community. Feeding the birds creates a relationship with them; a connection that makes seeing them into something with the power to actively and positively change one’s mood. I can attest to this. I’ve always fed the birds if I’ve had a garden but making an extra effort to watch my visitors, to get to know them, has recently provided me with feelings of happiness, calmness and joy – which have seemed in short supply from elsewhere.

The whole book hinges on the positive feelings that watching birds provokes. It is a guide to feeling better by going outside; consciously connecting with your surroundings and shaking off the malaise of the modern world. All one has to do to take advantage of its therapeutic properties is do it.

If you know someone who is struggling with anxiety, low mood or depression Bird Therapy is a book which could enable you to start a conversation with them about it – as well as offering practical help. Joe Harkness’s debut has value far beyond the natural history shelf and deserves a wide readership.