#30DaysWild 13: Thick thighs for a beetle

Last June I went to Sandwich Bay Bird Observatory to learn about bees – from the extremely knowledgeable Steven Falk. In case you are thinking, “Bees? At a bird observatory?” let me explain that many such places also monitor other wildlife and, in any case, Sandwich offers classrooms and such for hire and that’s where this course took place.

I’m not the biggest fan of crowds, but I do miss the chance to come together with other people who are passionate about wildlife. It’s invariably a great opportunity to learn new things – and often to learn extra things in addition to what you expected. The bee course was no exception on this front. 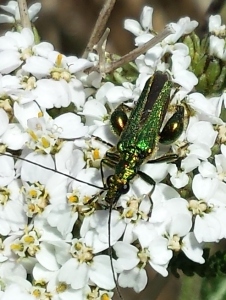 As well as being led on bee walks around the observatory’s nature reserves, on which we saw more species of bee than you could shake a stick at, it was the weekend I became acquainted with the thick-thighed flower beetle.

It’s described as a beetle of many names. Indeed it seems most people call it the thick-legged flower beetle, but its defining characteristics are being a shiny, iridescent green colour and back legs as chunky as chicken drumsticks. In proportion to its size of course, otherwise it would be terrifying!

I’d never seen one until last year, but have since seen them many times. (Including today, of which more below.) It was learning that they like to hang out and feed on pale coloured flowers on sunny days that helped me find and see these beetles by myself. They are

especially keen on plants like wild carrot or cow parsley, which are known as umbellifers because their flowers are made up of lots of tiny flower heads on a structure that’s a bit like an inside out umbrella.

Today’s thick thighed flower beetle was on my husband’s allotment plot. No, of course I’m not jealous that it wasn’t on mine. I thought the plant it was on (pictured right) was yarrow, but looking at the leaves I’m not quite sure. A variety of yarrow, if not the common wild type. In any case this is all about the beetles. There were several and one obligingly posed to have its picture taken. Add to this the watering, raking and some weeding I did on my plot and it think it’s not too bad for a morning’s work.