A version of this piece appeared on Mark Avery’s website, after being shortlisted (thanks Mark!) in his Lockdown Nature-writing challenge.

My dad used to say: “Time flies, we cannot, as so erratic is their flight.” He might have been quoting someone, but for some reason I never thought to ask. In lockdown, time is far from flying but I have been making time for flies. Hoverflies to be exact; except it’s hard to be exact – because there are so many species and identifying them ‘in the field’ isn’t always easy or even possible. 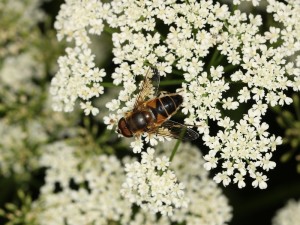 To say their flight is erratic is somewhat unfair. It may seem unpredictable to us, but in other ways it’s purposeful. Not to mention persistent. I enjoy the way they square up to me in the garden as they hold territory and almost seem to look me in the eye. (I must find out what I might look like to a hoverfly).

A glorious, sunny Saturday with barely a cloud in the sky, would usually be an occasion to take a long walk or a day trip to watch birds somewhere, ideally with the chance to enjoy a pub lunch and a pint. I can still walk, but the better the weather the more people it brings out so I stay in the garden instead.

I stand next to the rosemary bush, still sporting its flowers – which I can never quite decide the colour of. Mauve? Or more of a dusky blue? Whatever their hue, I can see it’s bustling with the comings and goings of different kinds of bees and of hoverflies too.

I am fascinated by hoverflies, but frustrated that they are not easy to identify. It’s a frustration that also extends to bees, for similar reasons. Many species look superficially similar but can’t be told apart without a hand lens or microscope. I could probably learn to swipe them up into a net, then grab them by a leg for a closer look, but I’d draw the line at dousing them in alcohol and pinning them down for ID. Not so much for ethical reasons, rather the romance of insect flight and the sound of buzzing is more of a joy than knowing what species something is.

Hoverflies are amazing in many ways, but not least because they have even managed to redeem social media in my eyes – a little. Swiping and pinning can be avoided thanks to a Facebook group dedicated to hoverflies. From this I’ve learned that the ones so numerous in my garden in late March and early April are calledEristalis pertinax (sadly, few have ‘common’ names). Lots of pictures of this species, showing their dark little bodies and amber coloured ‘waist’ markings), were posted from around the UK at the same time I was seeing them. It seems they take to the wing in March which also matches my experience.

Time flies when you are looking at pictures of hoverflies on Facebook, but it doesn’t seem like a waste of time. It’s no substitute for getting out and actually seeing wildlife with your own eyes – but it’s helped me get to know the nature nearest to me a little better. Eristalis pertinax now feels like a familiar, and friendly, visitor rather than a random fly.

The rosemary bush is not their only haunt. One went beyond the squaring up and landed on 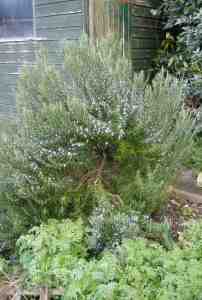 my hand. I stood stock still looking down at it and wishing I had my glasses on so I could see it properly. They also seem keen on the drain outside the garage door – perhaps it smells like the sort of damp, rotting material where some hoverflies lay their eggs? (I daren’t break out the Jeyes Fluid now, for fear of washing embryonic hoverflies to their doom.)

One buzzes loudly around the drain. (Later in the summer a different species will take over from it.) It seems annoyed to be disturbed by me coming out of the garage – so I apologise. Has the lockdown got to me so much that I talk to flies? No. I always talk to all sorts of creatures. Don’t you?

Anyway, I get a reward for my hoverfly diplomacy. It hovers and buzzes just above the ground next to the drain and, as it does so, I see that it’s setting up swirling little clouds of dust from the floor below it – like a tiny helicopter coming in to land. A little bit of hoverfly magic – that I might not have taken the time to look for if we weren’t in lockdown.